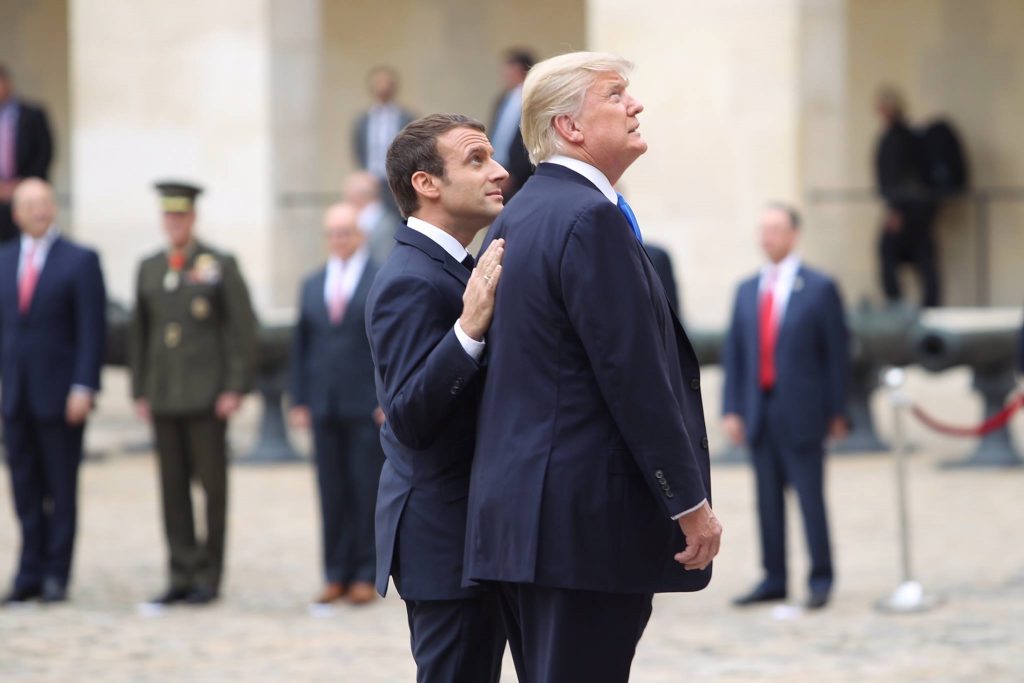 Donald Trump has welcomed French President Emmanuel Macron as his first state dinner guest, a positive sign of the unique relationship between the two countries’ leaders.

Macron and his wife, Brigitte, visited the Lincoln Memorial before joining the President and First Lady at the White House. They planted a French oak tree together on the South Lawn, then travelled for dinner at George Washington’s Mount Vernon estate.

The trip was not all about pleasantries, however. Hot on the agenda for the two leaders were international trade deals, tariffs, and the presence of U.S. troops in Syria as part of broader international efforts. Macron also gave a well-received speech to Congress, in which he seemed to rally against Mr. Trump’s more controversial policies.

While Trump and Macron have built an unlikely bonhomie, a key point of contention between the pair are planned U.S. tariffs on steel and aluminium imports from Europe, due to take effect on May 1st. In response, the EU has targeted nearly $8 billion in U.S. exports for reciprocal tariffs – raising the prospect of a trade war between the two long-standing allies.

The U.S. administration claims the tariffs are to protect its interests from foreign competition. President Macron, with his reputation as the ‘Trump Whisperer’, seems like he may have convinced him otherwise.

The strength of the relationship between Trump and Macron is, on paper, a curious one. The two leaders are strikingly different in many respects, with a significant age gap and a difference in policies. Mr. Macron is seen as a liberal centrist with cross-party support in France.

Macron however has seen an opportunity in courting Trump on the world stage. Brexit has left the UK in a position of weakness, while electoral troubles have plagued both Theresa May and Angela Merkel. With the UK and Germany indisposed, Macron can present France as the United States’ keenest ally.

The reluctance of some world leaders to embrace Trump has been keenly felt by the U.S. administration, who would be happy even with tacit support from abroad. Macron can offer this all-important public backing for Trump, but only in return for his support for France.

His ultimate aim is not just to improve his own country’s position, but to put it at the centre of a European revival. His latest gambit arguably came at the expense of Angela Merkel, who visited Trump just days later. Many see Macron as a natural successor to Merkel as de facto European figurehead, as the German Chancellor’s star has begun to wane.

Striking a deal with Trump to exclude Europe from new U.S. tariffs, such as on aluminium and steel, would be a significant gesture in this regard. It is also a dangerous game, though, given European voters’ general disdain for the sitting American President.

Macron has already shown that he can strike a balance between supportive and resolute, however. His firm handshake when the two men first met, and criticism of Trump’s position on the Paris climate accord, have been reflective of this approach.

Much will depend on whether Macron can continue to demonstrate that he is setting the agenda – a tough balance, given the U.S. President’s preponderance for power plays. If he can continue to be ‘firm but fair’ and secure his much-vaunted trade deals, the pair might solidify their special relationship.

We’ll endeavour to keep you up-to-date on the latest business news around the world. For more information on starting a business in France or the United States, or for any more business advice and services, don’t hesitate to contact us.

To talk to our specialists call us on:

We use cookies on our website to give you the most relevant experience by remembering your preferences and repeat visits. Read More. By clicking “Accept”, you consent to the use of ALL the cookies.
Cookie settingsACCEPT
Manage consent

This website uses cookies to improve your experience while you navigate through the website. Out of these, the cookies that are categorized as necessary are stored on your browser as they are essential for the working of basic functionalities of the website. We also use third-party cookies that help us analyze and understand how you use this website. These cookies will be stored in your browser only with your consent. You also have the option to opt-out of these cookies. But opting out of some of these cookies may affect your browsing experience.
Necessary Always Enabled

Performance cookies are used to understand and analyze the key performance indexes of the website which helps in delivering a better user experience for the visitors.

Analytical cookies are used to understand how visitors interact with the website. These cookies help provide information on metrics the number of visitors, bounce rate, traffic source, etc.

Advertisement cookies are used to provide visitors with relevant ads and marketing campaigns. These cookies track visitors across websites and collect information to provide customized ads.

Other uncategorized cookies are those that are being analyzed and have not been classified into a category as yet.

How we use your data

Universal Company Incorporations Ltd, herein known as UCI Ltd, will be what’s known as the ‘Controller’ of the personal data you provide to us.

We only collect basic personal data about you, which does not include any special types of information or location based information. This does however include your name, email, phone number etc.

Why we need it

We need to know your basic personal data in order to provide you with information on our services, offers and discounts, and news pertaining to those services.

We will not collect any personal data from you that we do not need in order to provide this service to you.

What we do with it

All the personal data we process is handled by our staff in the UK. However for the purposes of IT hosting and maintenance, this information is located on servers within the United States. This data is protected by the EU-US Privacy Shield, ensuring that your information is stored and treated with equivalent privacy and security laws.

This information is stored in a secure account on Mailchimp, an email marketing service. Mailchimp cannot use your data for their own marketing or promotional purposes, and no 3rd parties have access to your personal data unless the law allows them to do so.

As part of our integrated email marketing service, we also collect information on user interaction. This includes collecting data on actions such as opening the newsletter or clicking on links within the newsletter, which is then used to optimise future marketing materials.

We have a Data Protection regime in place to oversee the effective and secure processing of your personal data. More information on this framework can be found on our website.

How long we keep it for

Your data stored for marketing purposes will be kept with us until you notify us that you no longer wish to receive this information. You can do this by contacting us, or by clicking ‘unsubscribe’ at the bottom of our marketing emails.

What are your rights?

If at any point you believe the information we process on you is incorrect, you can request to see this information, and even have it corrected or deleted.

If you wish to raise a complaint on how we have handled your personal data, you can contact our Data Protection Officer who will investigate the matter.

If you are not satisfied with our response, or believe we are processing your personal data not in accordance with the law, you can complain to the Information Commissioner’s Office (ICO).

Our Data Protection Officer is Heather Landau, and you can contact them here.